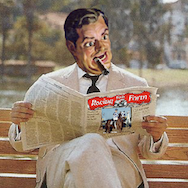 My dog loves it when I smoke. There’s no doubt in my mind that if he had fingers he’d light up himself. I’m pretty sure it’s the smell of the smoke he likes. I like it too. Yesterday the weather was mild and after being cooped up in the house for the last few months it was great to get out. We took a walk back in the woods and he was in heaven. The only thing that went wrong was he kept putting everything in his mouth and he got something in there I couldn’t get out. I think it was a skull of some sort. He was crunching away and when I tried to get it he got mad at me. Fine, you better not get sick, I’m just trying to help.

I was thinking about his sniffer while we walked. I don’t know how much better they smell things than we do but it’s a lot. Not just a little better or really better but some kind of super hero level better. If some lady bug rubbed her [back side] on a leaf, he’s gonna know. The reason it was on my mind is because I was smoking a pipe and I’m pretty sure he was using that as a way to keep track of where I was. It’s hard to tell what’s going on in that walnut brain of his but I’m pretty sure the only things he’s thinking about is what he smells, what’s for dinner and where’s a good spot to sleep. Kind of reminds me of myself. That nose is always going, never stops, even when he’s sleeping.

He a hound dog so that’s kind of their thing, but most dogs do the same thing. If I go out on the porch to smoke he always comes bumbling over and plops down. It’s like he’s enjoying the smoke with me. Now that I think of it, I wish there were some way I could get him to do reviews. Talk about picking out aromas and telling you if the room note is any good. Wait a second, he like to sniff piles of . . . never mind.

I’ve heard people say you shouldn’t smoke around your pet. There is probably some truth to that. I wouldn’t go blowing smoke in a cat’s face, he’s liable to claw the [expletive deleted] out of me. You know how cats are? They don’t put up with any crap. I also wouldn’t be smoking around any pet birds. I don’t know anything about their feathers but I imagine if they get stuff on them they don’t like it. They seem a little delicate to me. Dogs on the other hand love to smell things. If I went somewhere else to smoke he would just find me to hang out. Makes sense. If I think it smells good then he must think it smells ten thousand times better.

Why would I take that away from him? The sense of smell is linked to the sense of taste somehow. I don’t know how it works. If they can smell so good then wouldn’t they be able to taste things at some high level? Not sure if they can or not, they seem to eat anything, including that skull. All they usually get are those hard little dried-out marbles. That’s gotta taste terrible, and no I’m not going to try one just for this column. Go try one for yourself. I like to sneak him some real food when I can. Give a dog a strip of bacon and he’s your pal for life. I also give him some of my wife’s pork chops. Talk about hard and dried-out. He likes it so that might kill my theory about having a great sense of taste.

When he was a pup and I smoked he would stick his nose up in the air and it would be going a mile a minute. Taking it all in. I wouldn’t want him on the edge of a forest fire breathing that in but what’s wrong with a little cigar? If you could see him, his nose especially, you would agree with me, he likes it.

He’s getting up there. Dogs get old fast, such a shame. By the time they quit being a pain in the rear their life is half over. Pups are fun but they are always getting into trouble. They are good at picking out the most expensive thing you left out and chewing it to pieces.

But once they get settled out, there’s nothing better than a four legged furry friend. Especially one that appreciates my pipe.